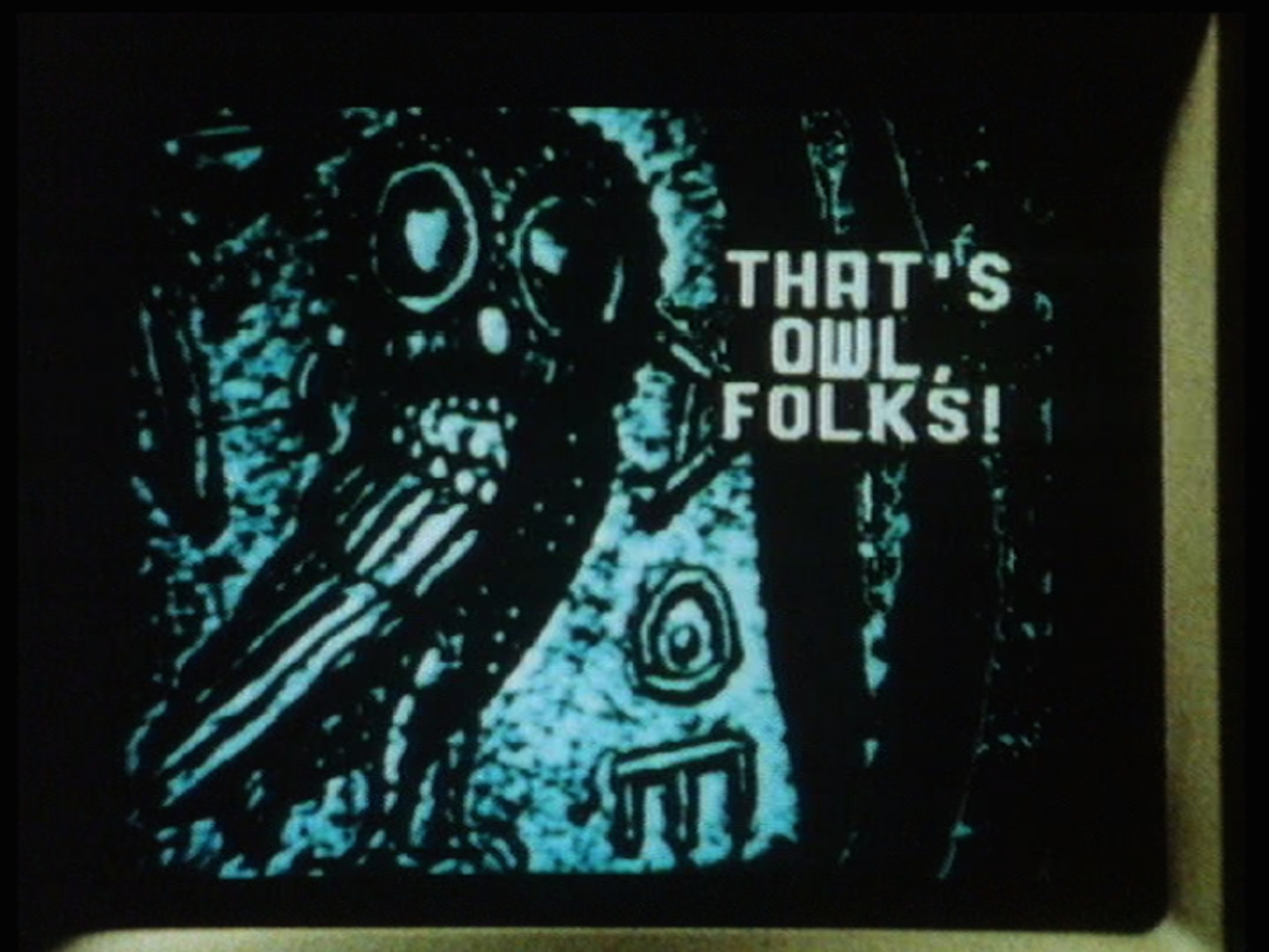 The Rijeka edition of the Film Mutations’ programmes are continued by the Series for Invisible Cinema for uncinematic spaces, bringing the monumental symposium exhibition – the multichannel installation by the Otolith Group, entitled Inner Time of Television. This television installation by the Otolith Group has been envisioned in collaboration with Chris Marker, an influential avant-garde film essayist, and is structured as a remediation of Marker’s TV-symposium series The Owl’s Legacy (L’Héritage de la chouette), for the First Athens Biennale of 2007 as an encounter with the forgotten archives of contemporary televisuality.

The Owl’s Legacy, with the subtitle: 13 Greek Words Deciphered By…  is a thirteen-episode series on the potentials and legacies of ancient Greece, which had been banned and rarely screened. Marker’s restrained emphasis and recapitulation of Greek words and ideas as Symposium (or Accepted Ideas), Olympics (or Imaginary Greece), Democracy (or the City of Dreams), Nostalgia (or the Impossible Return), Amnesia (or History on the March), Mathematics (or the Empire Counts Back), Logomachy (or the Dialect of the Tribe), Music (or Inner Space), Cosmogony (or the Ways of the World), Mythology (or Lies like Truth), Misogyny (or the Snares of Desire), Tragedy (or the Illusion of Death), Philosophy (or the Triumph of the Owl) brings to the foreground the earnestly playful pedagogy whose dimensions, scope, aspiration and ambition have long been rendered invisible on high-resolution digital TV screens.

In his essay Metamorphoses of the Owl, Jacques Rancière states the following: “The Owl’s Legacy was shown on Arte in June 1989. This moment is by no means coincidental. Already four years had passed since the emergence of Shoah. Godard was just starting his Histoire(s) du cinéma. This is the time of returning to the century’s history, to its horrors and genealogy, that which goes back near or far, even though nobody foresaw as to what would happen in autumn: the fall of the Berlin Wall, soon followed by that of the Soviet Empire.”

In that sense, we can view Inner Time of Television as exhumation, reconfiguration, displacement, invitation and encounter. This televisual experience recalls, revisits and reframes the legacy of the aforementioned notions and the processes of their remembrance, oblivion, and relearning. To reconstruct the serial format of The Owl’s Legacy in the gallery space means to unearth an older form of the televisual public space. Something that had been routine and domesticated now returns as an artificial encounter that renders visible the technical requirements of an extinct form with mass viewership. To meet the Inner Time of Television means to self-confidently inhabit the reconstructed modus of attention. Faced with the spatial configuration of thirteen television screens, the viewer is found face-to-face with a monument to dead television. 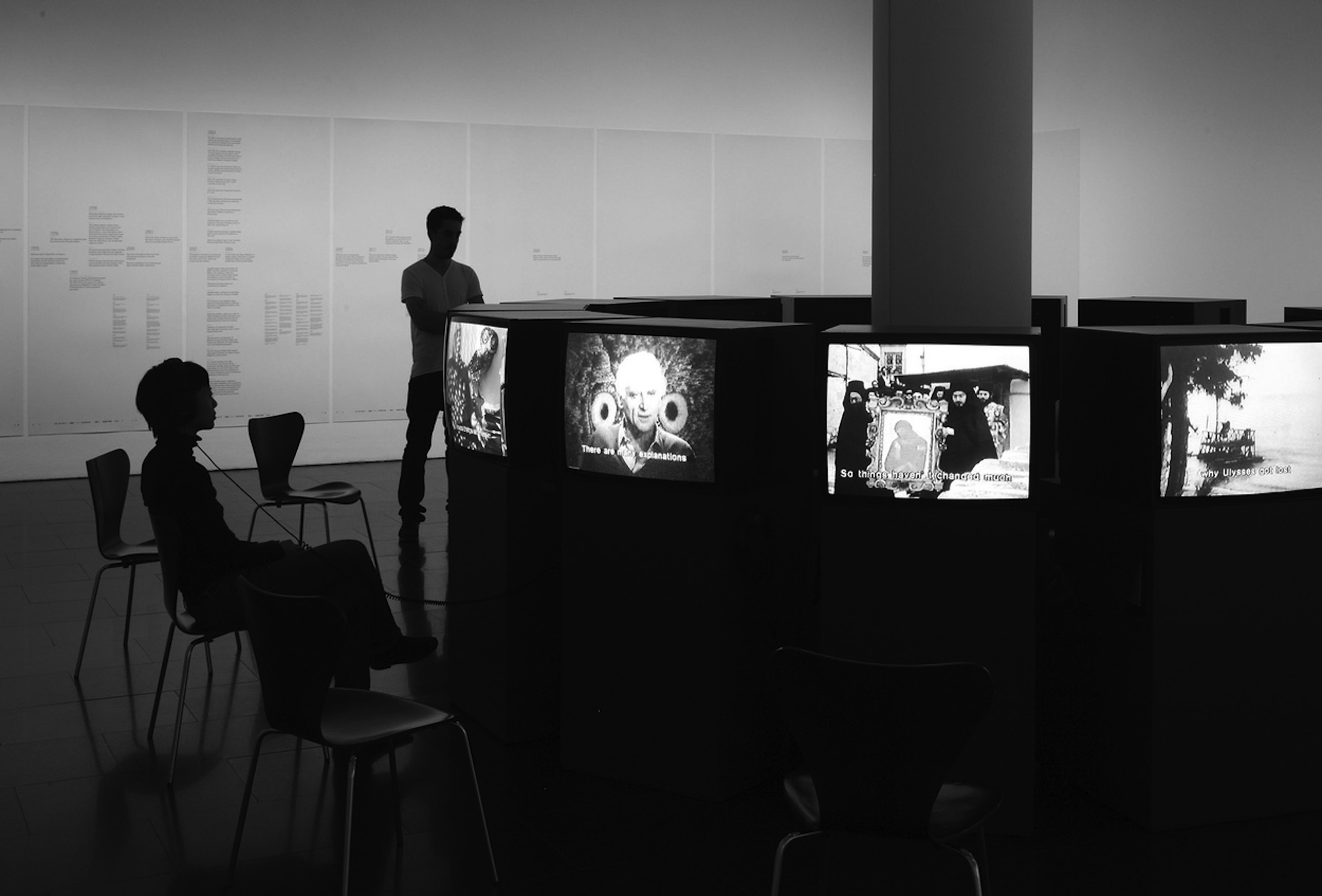 The Otolith Group is an internationally recognised and award-winning artistic and curatorial platform for collaborative, transnational visual, acoustic, performative and discursive policies and practices that are based on the concepts of archiving, living environment, and posthuman future. The Otolith was founded by film and visual artists, theoreticians and curators Anjalika Sagar and Kodwo Eshun in London in 2002. Their artistic practices redefine the experiences of film and interdisciplinary essayism by researching and reactivating film archives, narratives of the future, traumas of post/colonialism. The Otolith Group produces research projects, texts, installations and films by focusing on a wide range of topics, from the violence of global capitalism, iconography and media, utopic projects of modernism, legacy of the Non-Aligned and the Tricontinental, to the theory of Anthropocene and the correlation between contemporary global capital and climate crises. They use an approach of scientific and humanist research in their documentarist methods. Their fundament is the following formula: a film essay as a form that seeks to observe the conditions, events and histories in their most expanded forms.

In collaboration with Branka Benčić and Sabina Salamon (MMSU)

The project was prepared as part of the project TIMES OF POWER – Rijeka EPK 2020.

The programme has been implemented with funds of the City of Rijeka, Zaklada Kultura nova, Croatian Audiovisual Centre, and Ministry of Culture of the Republic of Croatia.

Previous Article
Ivan Kožarić: To Fly Into the Ether or Stay on Earth
next Article
90s: Scars
We use cookies to ensure that we give you the best experience on our website OkTerms of use