Vlatka Horvat, Who Come to Stand 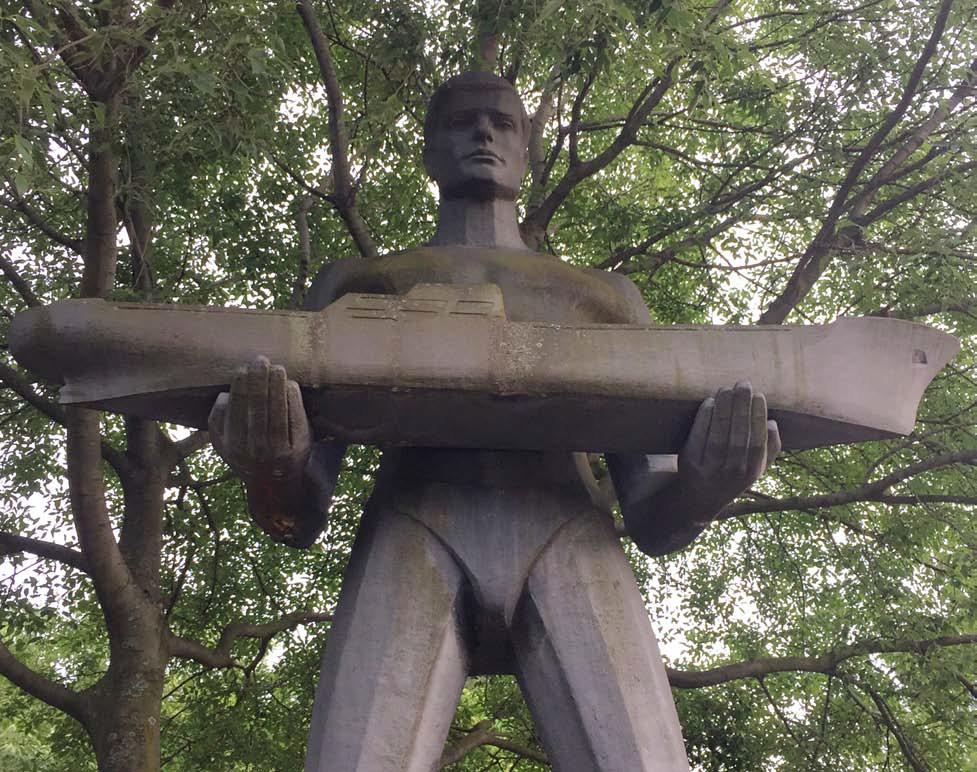 You are invited to take part:

Come to stand with me, holding an object of your choice, next to the statue of the man and the ship

About the work:
In the 1965 statue at the entrance to the shipyard 3. Maj, a larger-than-life male figure cradles a model ship, watching over it in a gesture of profound attention, care, and pride. The man and the ship – a labourer-as-maker and the thing he made – mark the long-standing relation between people and the sea, humankind’s search for agency over natural forces, and its ability to build machines that conquer distance. Standing tall on the side of the road, with his head partially covered by the crown of a tree, the statue both celebrates and memorialises – and in current context also mourns – the industrial heritage of shipbuilding and seafaring, the work of the port, and the labour of the hands.

Installed on the 20th anniversary of the liberation of Rijeka, the statue – work of the Rijeka-born sculptor Vinko Matković – stands next to the entrance of the shipyard. In a gesture of solidarity with the statue, artist Vlatka Horvat organises a performance in the form of a vigil, an action of joining the statue’s inanimate figure and standing with him holding other things worthy of being looked after, or celebrated.

Horvat invites artists and residents of Rijeka to join her at the statue, with an object they want to watch over, take care of, or magnify – a work tool perhaps, a personal item, a photograph, an item of clothing, a thing they made. Objects people might choose to hold alongside the man holding the ship might reflect one’s work and pride in work. Or they might speak of personal narrative or social change; they might speak of things lost, of lives lost, of memories that persist, or of hopes for the future. They can be objects of actual importance or significance, or metaphorical / symbolic objects that in some way stand for the thing a person may want to recognise, bring public focus to, or simply mark.

The task of the performance is to gather in a silent action on the side of the road – to stand there with something of personal or social value. A testament to persistence, perseverance, and to not standing down, Who Come to Stand creates a fragile human scale vigil in the shadow of the statue. The action of holding something becomes here a symbolic act of holding onto something – an actual object, an idea it encapsulates, a sentiment it evokes – as a quiet acknowledgment of things that survive; whether in material form, in memory, or in spirit.

Practical notes:
• If you decide to take part in the performance, you can come any time between 12noon and 8pm, and stay as long as you like.

• Bring an object to hold. Stand facing the road, somewhere alongside the statue of the man with the ship. Use the statue as a model for how to stand and how to hold your object.

• The idea is to not speak to each other during the performance, but to approach the action as a chance for contemplation, as a quiet act of commemorating or marking things that are important – things that might be under threat, vanishing or already gone.

• The item you bring to hold in the performance can be an object of personal significance to you; or it can be something symbolic or metaphorical that stands for or evokes ideas, feelings, hopes you want to highlight.

• People of all ages are invited to join. Children are welcome.

Previous Article
Lives on the Move – conditions in the altered state of borders
next Article
Installation in public space: 'Time Slip'