RAT ART: screening of a documentary about the independent cultural scene of Croatia during the war of the 1990s 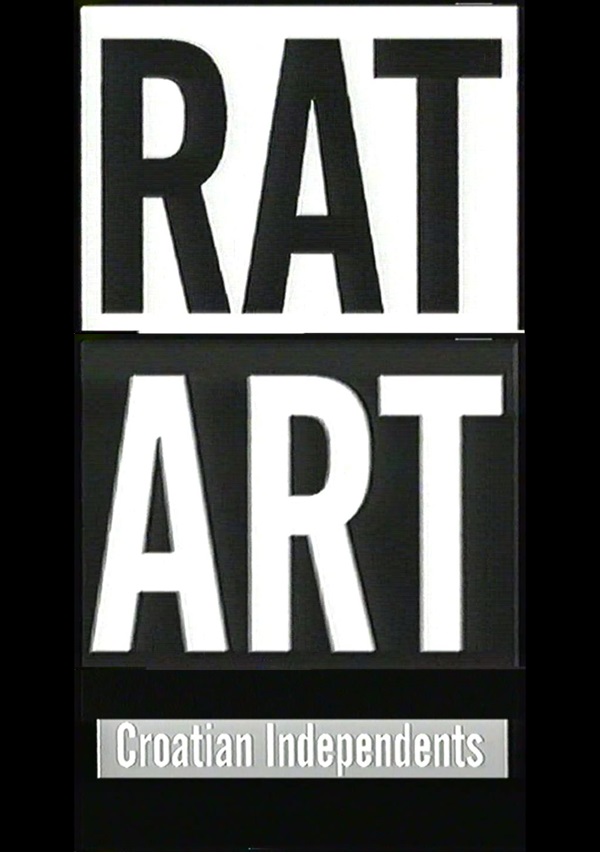 With the projection of the movie Rat Art – Croatian Independents by Canadian documentary filmmaker Zev Asher, the Institute for Contemporary Art begins a series of programs devoted to the 1990s.

In that period, the end of the century in Croatia, art was not paid much attention due to war circumstances, political, economic, social and information changes that took place in Europe and the world. The program series will be held throughout the year in Zagreb and Rijeka, and will be organized in cooperation with the Institute for Contemporary Art, the Museum of Modern and Contemporary Art in Rijeka, the Academy of Applied Arts in Rijeka and Rijeka 2020, the European Capital of Culture.

Zev Asher visited Croatia on several occasions during 1994 and 1995 when, primarily as a musician, he travelled around the country, and used the opportunity to document and interview the artists he met. These interviews became the foundation for his first documentary film ‘Rat Art: Croatian Independents’, where he talked with artists of various art disciplines, visual arts, music, graphic and fashion designers, music producers, directors … The video observes artists who create art in the context of society in the war.

The film was completed in 1997 in an independent co-production by Zev Asher and Sanja Živković, Box Trot Film. It was premiered at Cinematheque Ontario, the Pacific Cinematheque, Vancouver, Canada; the University of Chicago, and Visible Evidence Documentary Conference at UCLA, USA.

In Croatia, organized by the Institute for Contemporary Art, the film was first projected at the Mama club on February 17, 2002, with the promotion of CD Rom www.subversivemedia.com, and with the introductory presentation of Zev Asher. The second Asher’s documentary, which was screened at KSET on  February 19, 2002, was devoted to the cult Canadian rockers “The Nihilism Spasm Band”, featuring music performances.

A VHS copy of the film is preserved at the Institute for Contemporary Art, which Zev have left us as a gift and we a projecting it digitised. Originally it was filmed with Super 8 and Hi-8 cameras.

RAT ART: CROATIAN INDEPENDENTS (1997) directed by Zev Asher: An experimental documentary about art subculture in war-torn Croatia where creativity and subversion coalesce to form a vibrant community of artists. The film surveys an array of underground and avant-garde artists whose work was directly representation of his subjects through frenetic cuts, hand-held cameras, rock music, and ominous narration gives RAT ART its own unique edge.

Zev Asher s fascinating collage documentary RAT ART: Croatian Independents focuses on artists working in Croatia, a nation devastated by the war in the former Yugoslavia. (Rat is the Croatian word for war.) Many of these artists, working in the capital city of Zagreb, were relatively distant from the war zone, while others fought at the front lines (legendary punk icon Satan Panonski enlisted in the army so that he could steal a tank), but all were equally aware of the war s effects on their nation. The range of artistic expression covered in RAT ART is impressive: appearing in the film are installation artists, musicians, fashion designers, performance artists, rock video directors, comic strip artists, photographers, filmmakers and more. Although there are enormous differences between these individuals, many of them share a sense that, as one puts it, “time has stopped and civilization has no chance for advance.” Ironies abound in postwar Croatia in scenes like a car trip along the “Highway of Brotherhood and Unity” and one artists statement that “the most important thing in this war situation was to decide on and choose the most comfortable place to die in. With RAT ART, Zev Asher has developed a distinctive style of documentary; his observant, sharp-eyed camera work and quick, intelligent editing give the documentary s subjects an immediate presence and a powerful sense of urgency.

ZEV ASHER (9. 5. 1963. – 7. 8. 2013.) was an experimental musician and a documentary filmmaker from Montreal, Quebec, Canada. He played on his own or with other musicians under names Nimrod, Roughage, Zev Asher, Bustmonster, Flying Testicle, The Sleazy Listeners and Starlet Fever.
He dropped out of school when around 20 years old and left to live in Japan from 1985 to 1987. He has been interested in noise music since he was a teenager, as in the basement of his father, Stanley Asher, a passionate collector, he has found documents about the cult The Nihilist Spasm Band. In Japan, he also joined a noise scene, from which the alter ego Roughage emerged some time during the late 80-ieies, with which he performed in Japan, North America and Europe and also Croatia and the region, on several occasions.
In the 1990s he returned as an artist in residence to Medialinx Habitat / Canadian Film Center, Toronto and VFS multimedia, Vancouver Film School. In the mid-1990s, at the time of filming Rat Art, he lived in Vancouver.
After he was diagnosed with leukemia in 2003, he moved to China and filmed the movie Subcultural Revolution: Shanghai on the Torturing Nurse group. Due to illness, he returned to Canada and started working on a documentary film Zev Asher:GWH, which he did not complete.