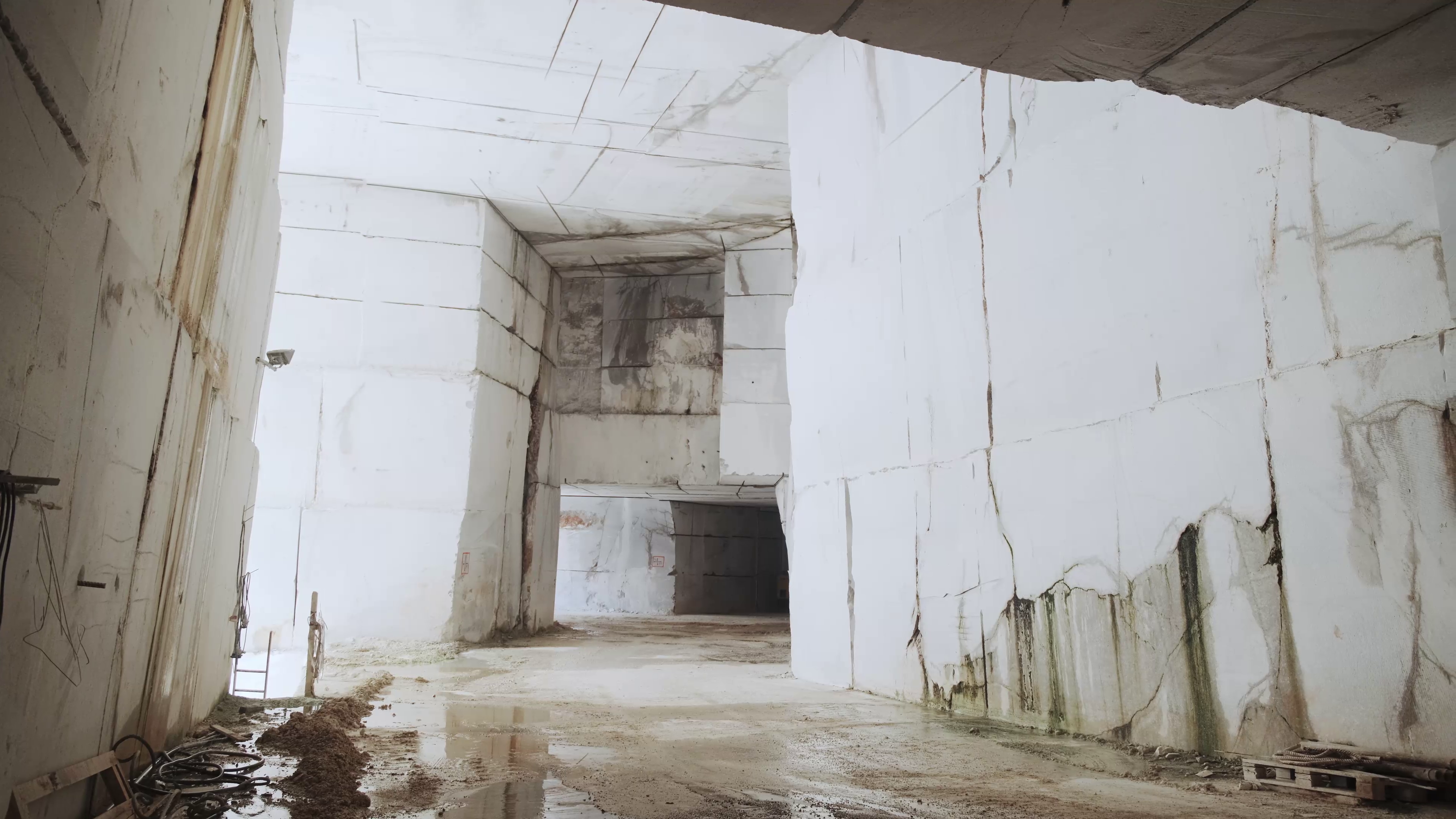 The Slovenian artist duo P L A T E AU R E S I D U E exhibits two video installations at the groundfloor of the Museum of Modern and Contemporary Art.

The P L A T E AU R E S I D U E is an imaginary identity of Aljaž Celarc (1989) and Eva Pavlič Seifert (1989). Their artistic production is based on researching landscape ecology, which they present in the form of extensive video installations in order to raise public awareness. In their works, they give voice to project participants, natural formations such as rocks, air, organisms and other clusters of substances, which they reorganize into new unusual forms and new media systems. They have been operating as a tandem since 2017. That same year, they attended a residency at the V2 Institute for the Unstable Media Rotterdam in the Netherlands, then a residency at the MGLC Švicarija Creative Center in Ljubljana a year later. In 2017, they received the TESLA Award from the Museum of Transitional Arts – MoTA. Their work has been featured in several solo and group exhibitions in Slovenia and internationally. They live and work in Novi Kot, in the hinterland of the forests of the Goteniška Gora and Snežnik mountains.

Research project Sub Persona focuses on the importance and ethics of human management of forests. Since human first settlements, to contemporary industrialised forest resource exploitation and deforestation, human impact have led to a decrease in the extent, quality, and condition of the self-regulatory mechanisms of the forest ecosystems.

Throughout history complex inter-species relationships and energy flows have enabled the forest ecosystems to successfully adapt to the effects of climate change, such as natural disasters. Today forestry scholars study the functioning of self-regulatory mechanisms in the remaining virgin forest reserves. Their new discoveries help to lead the management of other forests, as these are more vulnerable to the effects of climate change, compared to virgin forests.

Sub Persona emphasizes the shared responsibility of humanity to use modern methods to understand and recognise the complexity of forest ecosystems and develop sustainable management techniques that are based on the convergence of ecosystemic, economic, recreational and cultural functions, which are too often taken for granted by humans.

The music was created by Domen Učakar with the creative name Lifecutter, who creates music with various guitar effects and sound synthesizers. It leans against the background of noise and draws from various branches of electronic music, especially technoid sounds.

Their latest sensory video installation, Terra Ignota, addresses the sensory experience of biodiversity loss. It consists of a video projection and showcases inspired by natural history museum dioramas (only video projections are on display at MMSU). Their showcases, unlike the ones in museums, which serve as a speculative depiction of the functioning of ecosystems as seen by mankind, depict the decay of species in the Sixth Holocene Extinction. The latter has become inevitable due to mankind’s global destruction of ecosystems, anthropogenic climate change, and the perpetuation of persistent social injustice. Despite the fact that at the civilizational level we are aware of what extinction brings, monitor it quantitatively and try to visualize it through computer simulations, we cannot comprehend it, as it is unimaginable and too far in the future for our understanding. The project seeks to ambitiously reduce the human cognitive bias about the future that prevents us from making better personal and collective decisions for a more acceptable tomorrow. Through artistic treatment of current scientific and technological processes, products and related practices, the project addresses socially and environmentally relevant topics by including nature conservation and environmental issues. It seeks to approximate and embrace the hyper-objectivity of the already ongoing extinction, underlined by the all-encompassing and slow extinction of animal species, including humans, which will be among the last to be affected due to operating within a wider ecological niche.

The strong visual component of their installations is complemented by sound, most often the work of younger artists. The authors of the music are Ana Kravanja and Samo Kutin, renowned experimental multi-instrumentalists and members of the group Širom. The project also brought together a wide curatorial and production group, consisting of individuals working at the SCCA-Ljubljana Center for Contemporary Arts (Vesna Bukovec, Miha Kelemina), the Kino Šiška Center for Urban Culture (Anja Zver), Miklova hiša Gallery (Ana Pucelj) and KUD Mreža (Ana Grobler, Sebastian Krawczyk).

*Terra ignota (incognita) is a term used in cartography for regions that are not mapped or documented. The term is believed to have been first seen in Ptolemy’s geography c. 150. reintroduced in the 15th century after the discovery of Ptolemy’s work.

The project is organized in collaboration with KID Kibla, Maribor.

The event will be held in accordance with anti-pandemic measures to protect the health of citizens.

Previous Article
Sandro Đukić and Bojan Salaj: Archive as a Memory Construct Memory as the Construct of Present - Day Social Discourses
next Article
Sanja Iveković: MAKE UP – MAKE DOWN, a video retrospective
We use cookies to ensure that we give you the best experience on our website OkTerms of use