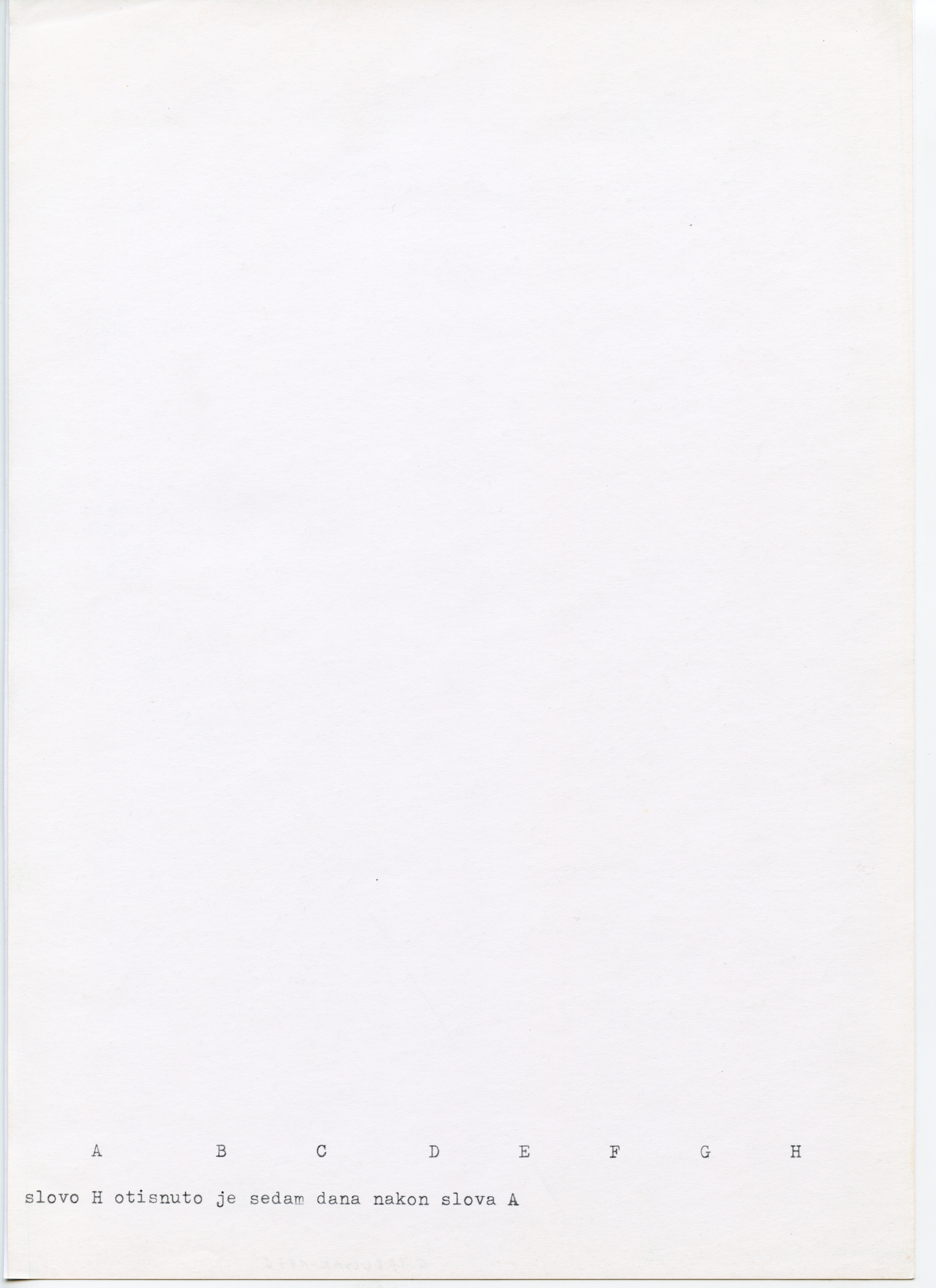 The opening of the exhibition:

As part of the Rijeka 2020 – European Capital of Culture project, on 22 February 2019 the Museum of Modern and Contemporary Art Rijeka is opening a large exhibition of the renowned conceptual artist, photographer, filmmaker and designer Goran Trbuljak.

This “pioneer of the Croatian conceptual art” has exhibited his work since the late 1960s when he began his art practice. He has had nearly two hundred solo and group exhibitions, his works are included in numerous museum and private collections, but the Rijeka audience has never the opportunity to meet this artist in a systematic way, until now.

The exhibition that bears the title of one of the Trbuljak’s works, a never before seen work by an unseen artist, presents the artist through works on paper – in one-line sentences that often function as aphorisms – and it is accompanied with talks, a book promotion, a film program and workshops. a never before seen work by an unseen artist will not follow the chronology of the artist’s practice; instead, it will attempt to define the main elements of Trbuljak’s art, focusing on two aspects of his work: the use of language, which includes investigation of the used medium and the method of artistic exploration, and the evolution of his art concepts and contents. A special attention will be devoted to his works Thisism (1970 – 1981), which so far haven’t been exhibited as a whole, but which indirectly disclose his contextual art practice.

Trbuljak began writing these simple sentences, consisting of only one line and typed on a typewriter in the bottom a vertically placed A4 sheet of paper, in 1971. At first, they served as captions that described, in the simplest and most impersonal way, Trbuljak’s photographs which were the artist’s first medium of expression (he earned his high school diploma from the Photography Department of the Zagreb High School of Applied Arts and graduated from the Zagreb Academy of Fine Arts, Department of Graphic Arts).

The sentences, which function as independent works of art that examine the act of perception but also the notion of art itself, reflect an important and engaged aspect of Trbuljak’s art practice. Trbuljak uses them to explicitly express his opinions, coated in specific linguistic formulations, which are stated as the effects of a consistent analysis (and a critique) of the society and the world of art, but also as the acts of self-reflection and self-critique.

In order to better understand the extensiveness and versatility of this artist’s work, it is important to note that he studied graphic art and painting (at the Zagreb Academy of Applied Arts and École nationale supérieure des Beaux-Arts in Paris), after which he studied cinematography at the Zagreb Academy of Dramatic Art. He is known for his work in film – he made 25 feature films, including Lost Homeland (directed by Ante Babaja), The Rhythm of Crime (directed by Zoran Tadić) and The Stallion Didn’t Like Him (Branko Schmidt) and he directed many animated and documentary films. Trbuljak also worked as graphic designer, for numerous magazines, such as Polet, Novine Galerije SC, Gordogan or Svijet and designed many film posters and opening titles, exhibition catalogs…

The exhibition is organized in the collaboration of Rijeka’s Museum of Modern and Contemporary Art and Slovene curator based in Rijeka, Tevž Logar, who is also the editor of Goran Trbuljak’s monograph published in 2018. In his long career, Logar worked as an art director of Škuc Gallery in Ljubljana, a lecturer at the Ljubljana Academy of Visual Arts (AVA), an associate curator at  Gregor Podnar Gallery in Berlin and a curator in Jasmina Cibic’s project for the Slovene pavilion at the 55th Venice Biennial. Logar is also a co-founder of Ulay Foundation in Amsterdam. In 2014 he was nominated for ICI Independent Vision Curatorial Award in New York.

Read the curator text by the exhibition curator Tevž Logar

The opening of the exhibition: