The Monument to Red Rijeka – The Self-Defensive Monument: Nemanja Cvijanović 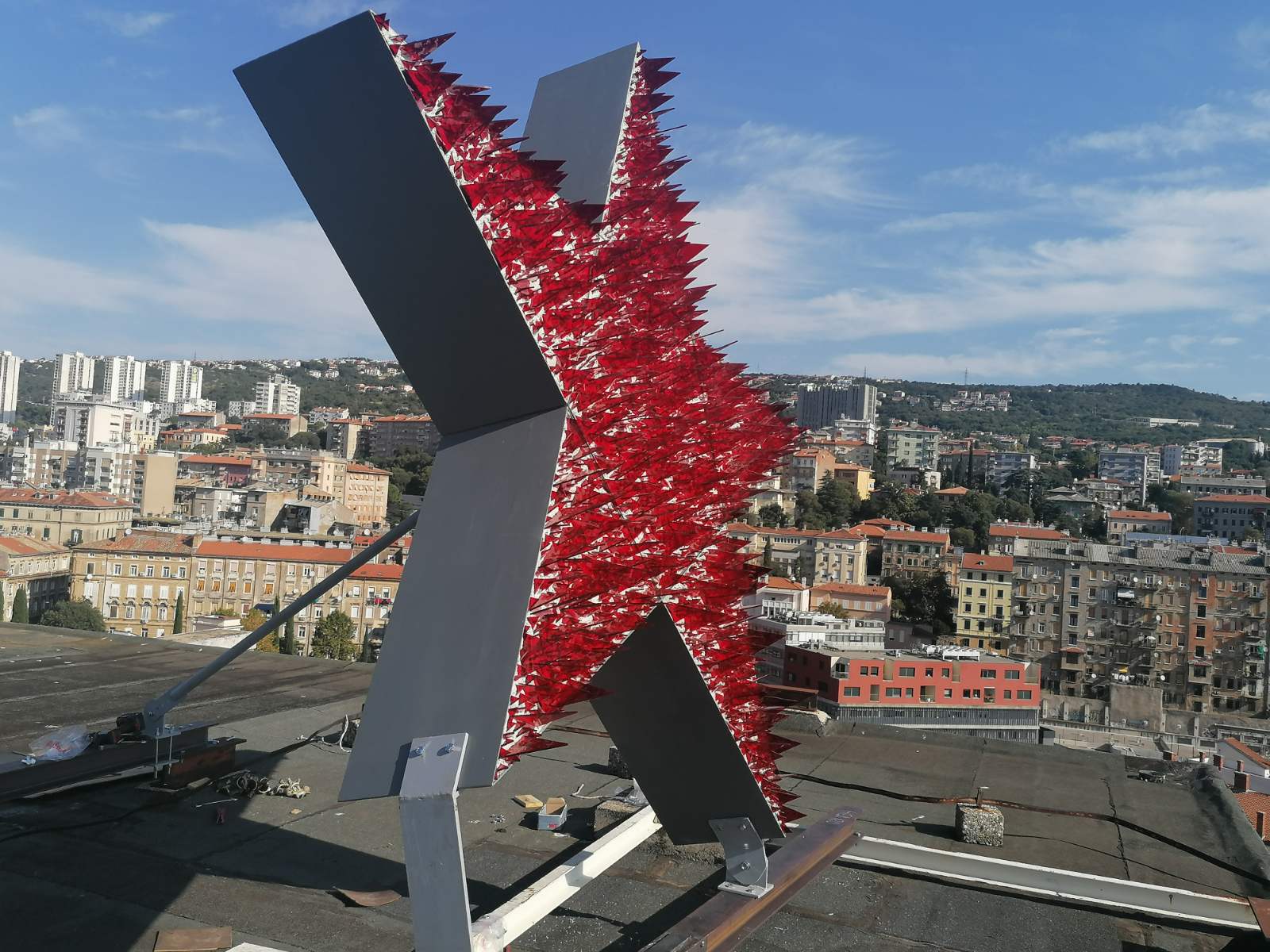 On Sunday, 20 September, Nemanja Cvijanović’s art installation Monument to Red Rijeka – A Self-Defensive Monument was erected in Rijeka as part of the European Capital of Culture programme.

It is a large sculpture shaped like a five-pointed Partisan star, which has been discarded and forgotten, and studded with 2800 glass shards symbolising the 2800 fighters who died in the battle for Rijeka. The installation is an integral part of the Pocket Turned Out – Art Interventions in the Public Space programme organised by the Museum of Modern and Contemporary Art as part of the Times of Power flagship. Times of Power is a Rijeka 2020 – European Capital of Culture flagship that addresses and explores the historical shifts and current manifestations of power.

“The primary symbolism of this slanted and truncated star communicates the paradox of the discarded yet still “dangerous” anti-fascist and revolutionary legacy as a symbol of the international labour movement and the struggle for a more just society”.  N.C.

The monument to red Rijeka was erected on 20 September, the day when in 1943, following the capitulation of Italy (8 September 1943), the Executive Committee of ZAVNOH made the decision to reintegrate Rijeka, as well as Istria, Zadar and other parts occupied by Italy in World War II, into the Croatian motherland, which was later confirmed at the ZAVNOH assembly in Plaški. The sculpture will be erected from 20 September to 4 October 2020.

It is installed atop the Rijeka skyscraper and is reminiscent of the red star that was erected in the same place in 1945. Out of reach and facing the sky, this self-defensive monument addresses the issue of inviting an (un)wanted guest (a five-pointed star) into the very fabric of the city, a question of defensiveness, which perennially accompanies attacks on the unwanted and the vicious circle that emerges from such a relationship.

The artist Nemanja Cvijanović created his work fully aware of the trend of selectively but systematically abandoning historical monuments to oblivion and destruction. The shards of red glass symbolically pre-empt the potentially damaging vandalism of the five-pointed star and reflect the ability of the monument to resist destruction and oblivion. The primary symbolism of the slanted and truncated star communicates the paradox of the discarded yet still “dangerous” anti-fascist and revolutionary legacy as a symbol of the international labour movement and the struggle for a more just society.

It should be noted that as soon as it was announced that the monument would be erected on the originally planned date of 3 May on Rijeka Liberation Day, the art intervention sparked significant attention from the media and plenty of reactions from the public and individuals on social media, as well as from politicians, who used it to share their sentiments on the subject and emphasise the position from which they spoke.

Within this expected context and by erecting the monument, the artist poses the question of whether this slanted and truncated symbol can remain a part of the city’s identity, with the star’s slantedness acting as a symbol of the position of anti-fascism in the modern age. To be more precise, can a star that is a part of our cultural heritage, regardless of the opinions associated with it, remain a part of the identity. Can it defend itself from a historically revisionist agenda and defy it?

The Italian curator and critic Giacinto Di Pietrantonio, who last year invited Nemanja Cvijanović to the Autostrada Biennale in Kosovo, said the following, among other things: “In its essence of a still image of the past and present, this artwork becomes necessary in a chaotic age in which democratic freedoms have been challenged. It reminds us that we must never stop fighting for our civilised essence (…). It is a monument that we need today more than ever before”.

The day on which Cvijanović’s Monument was erected can complement the words uttered by the Italian curator Di Pietrantonio. It was on this day, 20 September 1943, that the State Anti-Fascist Council for the National Liberation of Croatia (ZAVNOH), whose Executive Committee was presided over by the author Vladimir Nazor, adopted the Decision to return Rijeka to Croatia.

With this decision, all agreements, pacts and conventions made with Italy by various Greater Serbian governments, traitors of the Croatian people and Italian governments, with which Croatian regions were relinquished to Italy, were declared void. ZAVNOH’s Decision stipulated that “all of the aforementioned Croatian region, specifically Istria, Rijeka, Zadar, the annexed parts of the Croatian Littoral, Gorski Kotar, Dalmatia and all Adriatic islands (including herein Lastovo, Cres, Lošinj and the others), shall be reintegrated into their motherland – Croatia”. This decision also granted autonomy to the Italian national minority that resided in these areas.

Modern-day anti-fascism, which includes democratic freedoms and the fight for human rights as the civilisational achievements of a society, is rooted in historical anti-fascism. The symbolism of the day on which this artwork was installed in Rijeka and remembrance of the historic fact that Rijeka was reintegrated into Croatia during the aforementioned historical period marked by anti-fascist struggle are important for precisely this reason.

The artist Nemanja Cvijanović graduated from the Accademia di Belle Arti di Venezia with a degree in painting and earned his postgraduate degree in visual art design and production from the Department of Architecture and Arts of the IUAV University in Venice. His works tackle social and political issues by establishing connections with events from the recent past as a product of his fascination with the phenomenon of collective memory. By emphasising the position of responsibility and awareness in relation to the anomalies of contemporary society, he engages observers in an intriguing relationship with memory, changes to value systems, propaganda, consumerism and mass media.

Cvijanović boasts a plethora of awards and has exhibited his artwork at prestigious global art events, exhibitions and artist residency programs, ranging from Rome to Vienna. So far, his works have been displayed at approximately 300 international exhibitions in Europe and the USA, as well as in Guatemala, China and South Korea. He has also collaborated with foreign galleries. Together with the Italian gallery T293 from Naples, he has participated in several international contemporary art fairs, such as “Artissima 11”, “Artissima 12” and “Artissima 13” in Turin, Italy, “Liste 05”, “Liste 06” and “ART BASEL” in Basel, Switzerland, the Antwerp Art Fair in Belgium and FIAC in Paris, France. The Slovene ŠKUC (Student Cultural Centre) gallery also showcases his works at contemporary art fairs, many of which are included in Croatian, French, Italian and Swiss private and museum collections.

Previous Article
Matej Knežević: Case Report with Review
next Article
MMSU temporarily closed
We use cookies to ensure that we give you the best experience on our website OkTerms of use