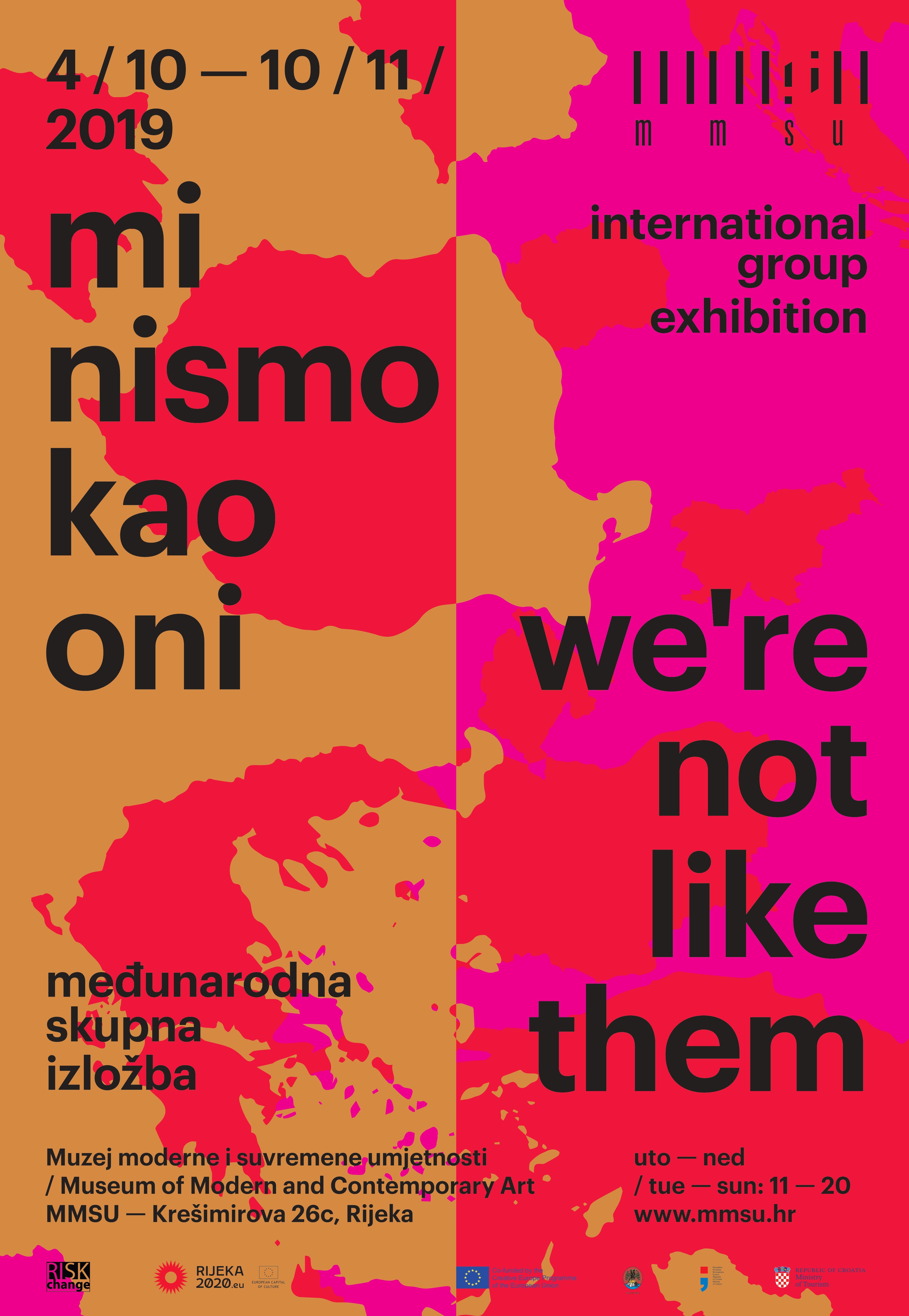 Following the topics of forced migrations and escape, in the final episode of the project RISK CHANGE, entitled “We’re Not Like Them”, we occupy ourselves with the notion of foreigner and foreign spaces. We deal with prejudices with which we construct the picture about others, but we also address the question of how others see us. We also want to know which stereotypes about foreign spaces are still present today, and are there any new ones invented? On the intersection of contemporary art, anthropology and social psychology, we examine an unusual glossary containing the terminology of ‘the other’ – a neighbor, a stranger, a newcomer.

The relativity of concepts of the Other and the dependence of these concepts on social and political context form the basis of the fourth exhibition of RISK CHANGE project.

“We’re Not Like Them” recognizes the (black) humor note in the perception of ‘us’ and ‘them’. The exhibition combines the aspects of a cultural study of stereotypes, a travelogue, a documentary fiction about the figure of stranger in modern Europe and an artistic satire on social landscape, with myths of superiority, colonial history, lust and obsession with purity as its main elements.

Along with the documentary materials, the exhibition gathers some twenty works, varying from intimate confessions to allegorical and critical accounts, which have been created from the 1950s onwards. Contrary to the modern proclamations about cultural diversity, in the troubled times of social changes, the perception of the Other often takes on a negative charge, which manifests in exclusion, repulsion, negation and the creation of a fictitious image of the main culprit.

In the newly formed, post-socialist countries and the western democracies alike, we see hostile attitudes towards the Other, attitudes that often exist only in shady simplifications of ‘us vs. them’. One of the works that investigates these symptoms is Ivana Keser’s jumbo poster which deals with hallucinatory phrases about “the cradles of civilization surrounded by barbarians”, identifying them as myths about superiority of one nation over others. The quotation appears in different languages, perpetuating the mythical question, “Who Was First?” (who came first to a territory, who came first in cultural achievements? …)

Cartography is no longer based on literal divisions into ‘black’ and ‘white’, ‘the savage’ and ‘the civilized’ – today it is normalized using subtler means – but, regardless of its multicultural image, it still resides on negative conceptions and underestimation of the Other (Brook Andrew, Janez Janša, Janez Janša, Janez Janša; Danilo Milovanović, Vangjush Vellahu).

Fearing from the inevitable global changes that shatter people’s identities, but also elevate those of status and national power, the Other remains qualitatively different and kept under surveillance. Hence, we are not surprised by question “is being Albanian a sin?” that artist Driton Hajredini asked a catholic priest during a confession (“The Sin”).

In the past, myths of the Other were mostly gathered in official decrees issued by rulers, in cartographers’ maps and writers’ travelogues about exotic and underdeveloped foreign lands. This is shown in the documentary materials of this exhibition, for instance, in geographic maps from British Library, in Chris Marker & Alain Resnais’ film about colonial history and ethnographic museums “Statues Also Die”, and in the notes about Rijeka written by foreign writers1, present on postcards made by Nina Delanović & Mirna Gurdon.

The power of today’s media and their influence on the categorization of even the most distant parts of the world is equally fascinating. Moreover, culture plays the role of an accomplice in exoticizing (Avgust Černigoj) or undermining of the Other, which is depicted in the works of Lana Čmajčanin and Nika Autor. In installation “Balkangreuel”, Čmajčanin reveals an elite graphic portfolio of the same name, created at the beginning of the 20th century in Vienna. A pornographic content disguised as artwork, “Balkangreuel” symbolizes the means of dehumanizing the enemy – the Balkan brute – with a female body depicted as an unknown, menacing territory.

The installation by Nika Autor goes along the lines of exhibition “Peace, Humanity and Friendship Among Nations”, held in 1966 Slovenj Gradec with the support of the UN, which gathered the artists from the Non-Aligned Movement and the West, but it reconstructs its utopian postulations about creating a better and more peaceful world by running diplomatic and cultural activities. At the same time, it shows how political categories invaded the field of art – media coverage and awards mostly went to the western authors. Half a century later, the world map looks completely different and the West is closing its door to its former “fellow” countries.

Instead of language of assertion

Dealing with stereotypes about the Other, some of the works in this exhibition investigate linguistic constructions that still exist in the form of oral tradition and folklore, and at the same time present language as the basis for defining the image of oneself. Driton Selmani’s installation “Two Jokes Make One Truth” uses documentary accounts, jokes and paraphrases about the Other that spark discomfort but also release negative emotional charge.

In the space between the attractive and the repulsive, the works from “We’re Not Like Them” seek to alter the known perspectives. They see auto-censorship as the main mechanism in creating stereotypical assumptions. Therefore, in contrast to traditional eulogies given in the honor of an active male traveler, warrior, conqueror, in the performative speech “Soundwords”, the main role is occupied by a woman, as an explorer and programmer in World War 2.

While investigating the fears provoked by the figure of stranger, the exhibited works ridicule the defensive mechanisms that protect the desirable image of self. In some of the works, the figure of stranger/outsider is ambiguous, blurry and slippery. For example, Gildo Bavčević’s video “021_123”, a triptych about the city of Split, shows how the local people slip into position of outsiders at the height of the tourist season. They take up this position on their own accord, in order to secure themselves a better life.

In the increased mobility and the omnipresence of media and communication technologies, stereotypes – national, class, gender and other – have the potential to change. Therefore, this exhibition illustrates them not just in their extreme polarities, but also in their inversions and modifications. They seem to disintegrate in individual instances, in cases of personal experiences and situations of people getting to know one another better.

They change by means of mixing the cultural codes and fighting the authoritarian symbolism (Olga Dimitrijević, Simon Farid, Fotini Gouseti). In between contrasted descriptions of ‘us’ and ‘them’ – ‘advanced vs. backward’, ‘virtuous vs. ungodly’, ‘civilized vs. aggressive’ – with this exhibition will try to make fun of our own desire to be bigger, louder, more successful and more beautiful than we truly are.

The stranger presents himself as a figure of rumor, delusion and paranoia of his own subconsciousness, often in a tragicomic reflection. “Blue Blood” by Mirna Kutleša starts from the mentioned term, which first appeared in the 17th century among the Spanish aristocracy. The term picturesquely described the people who were spared from toiling and being in the sun, and thus had pale skin through which blood vessels could be made out. This was what separated them from the others. Kutleša’s drawing resembles the forms of roots, trees and veins and consequently indicate the obsession with noble family heritage. They contain words that associate with the term blue blood but are hidden. Still they can be read if one looks closely: royal lineage, degeneration, incest, paranoia, hemoglobin…

What we see here is an amazing human affinity to making things up, finding the pseudoscientific excuses for exclusion of the Other. This hide-and-seek game reveals itself to be the most popular one among the adults. Wrapped in rainbow colors it is yet a schizophrenic trap – “We’re Not Like Them”.