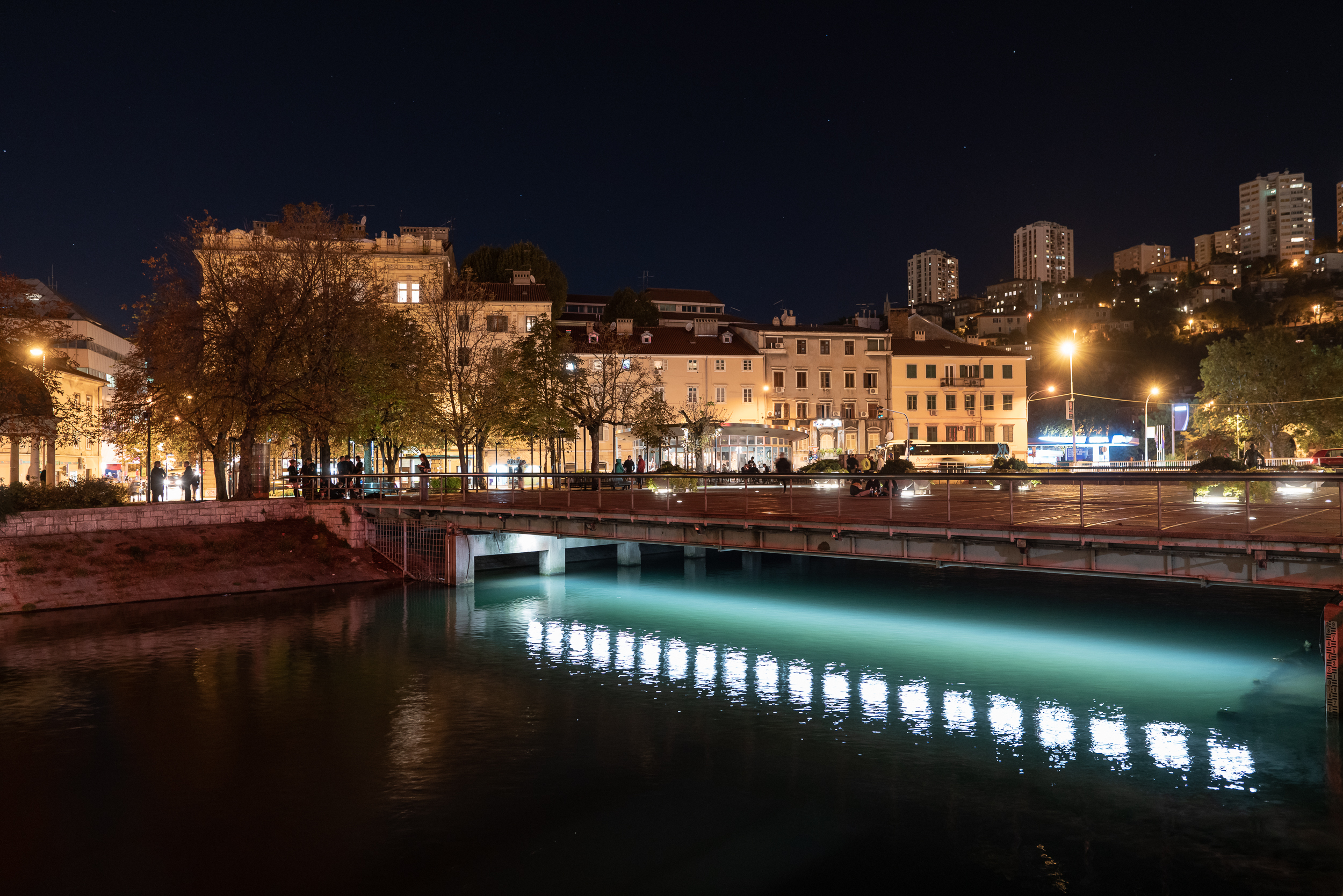 As part of the Rijeka 2020 – European Capital of Culture project, in 2019 and 2020, the Museum of Modern and Contemporary Art Rijeka will be presenting a series of art interventions, dedicated to the subject of public space, which would contribute to the physical and symbolic modifications of Rijeka’s urban landscape.

The common goal is to revive the currently inaccessible or neglected urban areas and to create new spaces of encounter and public life all the way from the Rječina River to the seashore, from Delta to the Benčić compound.

The 2019 season opens on 11 October, at 8 pm, at Titov Trg (in front of Continental Hotel) with the opening of public light installation Time Slip created by Croatian artist Ivana Franke and Finnish artists Tommi Grönlund and Petteri Nisunen. Pursuing the contemporary spatial art practices, the invited artists intervened on the traditional place of gathering of the young, of historical divisions and unifications, and the epicenter of Rijeka’s urban life. Situated underneath the Titov Trg, the work problematizes topics of remembrance, continuity of time and it’s ruptures, modifying the stream of the Rječina river. The work deals with the topic of water, which is one of the umbrella topics of the Rijeka 2020 – ECC and the corresponding Sweet and Salt program line.

Water is also used in the installation Imminence, which occupies the currently empty spaces on the ground floor of the Rijeka Museum of Modern and Contemporary Art, which will be shown to the public on the same day, after a walk from the Titov Trg to the Museum. The installation unites the elements of water, light and sound, breathing life into the new cultural center of this city – the postindustrial compound Benčić. Placed in the old, deteriorated part of the Museum, the work will convey the idea of water as a regenerative and dynamic element threatened by climate changes that violate our living conditions and jeopardize the whole ecosystem. In the spring 2020, during the Croatian presidency of the EU Council, the work will be exhibited at Galerie Anhava in Helsinki.

The exhibition Imminence will be open until March 2020, and the public installation Time Slip will stay open throughout 2020.

Ivana Franke is a visual artist who works with light, with an interest in the boundaries of perception. She participated in numerous international exhibitions, such as Schering Stiftung Project Space in Berlin (2017), Shanghai Biennale (2016), Peggy Guggenheim, Venice (2011), Deutsche Guggenheim, Berlin (2012), Manifesta 7 (2008), Venice Biennale (2007), and MoMA P.S.1. (2001).

Tommi Grönlund & Petteri Nisunen are a duo of artists based in Helsinki, who started working together in the 1990s, after completing their studies in architecture. They have created numerous public commissions and took part in exhibitions in venues such as Powerlong Art Center, Hangzhou (2018), MUDDAM Luxembourg (2015), Marrakesh Biennial (2014), Moscow Biennial (2009), Sao Paulo Biennial (2007), Art Unlimited / Art Basel (2005), Yokohama Triennial (2001), Venice Biennale (2001) and Manifesta 1, Rotterdam (1996).

Franke, Grönlund and Nisunen had simultaneous exhibitions in the Museum of Contemporary Art in Zagreb in 2017.

Prethodni Članak
Vlatka Horvat, Who Come to Stand
Idući Članak
Niko Mihaljević: The Museum of the Crystal Skull
We use cookies to ensure that we give you the best experience on our website OkTerms of use